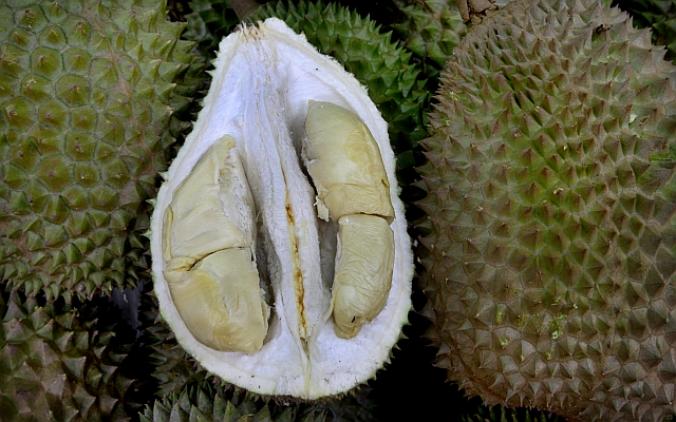 “Smells like hell but taste like heaven”, “the king of fruits”, “the world’s smelliest fruit”, these are just some of the expressions people would use in describing the black pearl durian or any durian for that matter.

The controversial fruit Black Pearl Durian is just one of the many types of Durians. Durian is a seasonal fruit and is common in Asia . The Black Pearl Durian variety is said to have originated in Johor Malaysia.  Also known as Hei Zhen Zhu, black pearl has a pale yellow grayish color. The texture is smooth and creamy and the taste is slightly bitter. The husk or pericarp is color yellow- green which will slightly change to brown when ripe. Compared to other durians, black pearl has smaller seeds. The seeds are not edible by the way.

Richard Sterling, a food writer wrote that “its odor is best described as…turpentine and onions, garnished with a gym sock. It can be smelled from yards away”. Because of its very pungent and disgusting smell, durian is actually banned in many public areas like in- flights, hotels and even MRTs like in Singapore.

So how do you eat durian? Majority will eat it fresh and raw. In Asia, it is common to see fruit stalls selling fresh and ripe durian, they will open the fruit in front of you and you can eat it on the spot. Some would even cover their noses as they eat it, some would smell it and be disgusted by it and still eat it anyway.

Can’t even stomach this funny looking, spiky fruit? Well, you can try the durian flavored ice cream, fried chips, durian candies and custard. Once you get the hang of it, then maybe, just maybe you can try eating the fresh black pearl durian.

Black pearl durian along with the other varieties of durian is also used in traditional Asian medicine, as both an anti-fever treatment and an aphrodisiac.

Durian is loved in Southeast Asia but also hated by many.  Give it a try and decide which side are you on.